British Prime Minister Johnson, after the 2nd quarantine lifted on December 2. He announced that they will switch to a 3-stage combat plan.

British Prime Minister Boris Johnson, within the scope of combating the new type of coronavirus (Covid-19) outbreak. The quarantine will end on 2 December. Then he said that the 3-stage plan will be implemented until spring.

In his speech to the House of Commons, Johnson announced the government’s plan to combat the pandemic, which will be valid during the winter months.

Noting that the second national quarantine, which started on November 5, will be lifted on December 2, Boris Johnson. He said people could no longer meet outside so as to not exceed 6 people.

Collective worship and weddings will be allowed again, shops where non-essential products are sold, sports halls, entertainment facilities. Stating that hairdressers will be reopened across the country, Prime Minister Johnson announced that they will switch to a 3-stage struggle plan after December 2.

Stating that in the first stage, people will be asked to work from home if possible, and in the second stage, alcoholic beverages can only be sold alongside the meals, Johnson explained that during these stages, restaurants and bars will no longer be closed at 22.00, but at 23.00 and a limited number of spectators can be admitted to the stadiums.

Stating that in the third stage, entertainment venues and hotels will be closed and restaurants can only offer takeout services, Boris Johnson stated that this plan will be valid until spring.

Stating that which region will be at which stage will be decided according to the situation of the pandemic in that region, Johnson also stated that some rules can be stretched at Christmas.

“I can’t say that Christmas will be normal this year,” said Boris Johnson, who said they are working on a Christmas holiday plan that would allow families to get together but also minimize risk.

Prime Minister Johnson announced that people who need to isolate themselves due to contact with someone carrying Covid-19 will be tested every day for a week, and only those who test positive will be quarantined.

In the face of increasing cases in the UK, a quarantine decision was taken on November 5, all commercial businesses except markets and pharmacies where basic products were sold were closed, and it was announced that restaurants and bars could only deliver take-away services.

With 55 thousand 24, cases started to exceed 30 thousand daily until the effect of quarantine was seen in England, where the most deaths from Covid-19 were recorded in Europe. 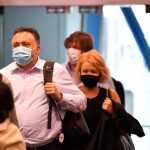