Republican Donald Trump and Democrat Joe Biden are the presidential candidates to face in the US live broadcast debate tonight. It announced that the new type of Coronavirus (Covid-19) tests made by Donald Trump and Joe Biden were “negative”.

Shortly after the first live broadcast debate on September 29, after Trump caught Covid-19. Both candidates have tested for tonight’s debate.

In the statement made from the Biden campaign, it announced that Biden’s test “negative”.

White House Chief of Staff Mark Meadows also told reporters after Trump’s plane landed in Tennessee, where the debate will take place. “We had Trump tested on the way, and the result is negative.”

Trump and Biden 12 days before the November 3 presidential election in the US. NBC will face off at Belmont University in Nashville, Tennessee, at 9:00 p.m. local time, moderated by Kristen Welker.

The debate is fighting Covid-19, according to the Presidential Debates Commission (CPD). It will be held under 6 topics: family, racism, climate change, national security and leadership.

During the 90-minute discussion, 15 minutes will be allocated for each topic. At the beginning of each topic, candidates will given 2 minutes of opening speech. 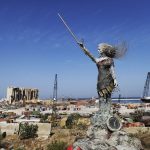